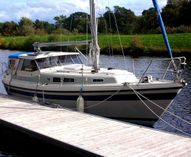 This is a well equipped and beautifully maintained example of this very popular and renowned sailing cruiser from Hurley Yachts absolutely must be seen to be believed.


Engine removed and overhauled in 2008.

Hull,deck and superstructure are all of GRP.

12 volt electrics throughout supplied by 3 x 12volt/85ah batteries which in turn are charged by an engine alternator.


Heads are just aft of forward cabin thwart-ships with WC and wash basin to Port and Hanging locker opposite to Starboard.


Galley aft on Port side with cooker,sink, good locker and work surface area.


Chartable situated to Starboard side with instrument and 12 volt panel above.


Quarter berth on Starboard side aft of chartable.

The Company offers the details of this vessel in good faith but cannot guarantee or warrant the accuracy of this information nor warrant the condition of the vessel. A buyer should instruct his agents, or his surveyors, to investigate such details as the buyer desires validated. This vessel is offered subject to prior sale, price change, or withdrawal without notice.

Boats for sale
by continent

Boats for sale
by country